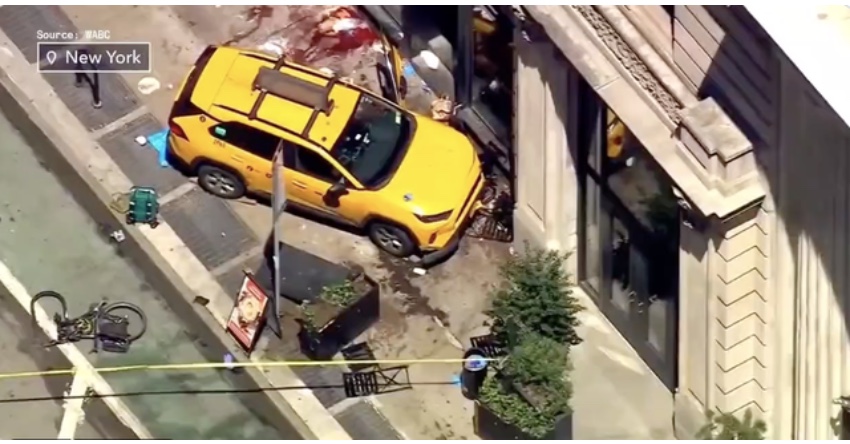 Up to 20 New Yorkers tried to lift a taxi after it jumped a curb and pinned two women against a building wall in the Flatiron district on Monday, 20 June.

According to the Independent, police say the southbound yellow SUV cab hit a cyclist before mounting the pavement on Broadway just before 1pm.

NYPD Deputy Chief John Chell told a news conference that the cab struck two female pedestrians and pinned them against a building wall.

“As this occurs, a remarkable scene took place. About 15 to 20 New Yorkers attempted to pick this cab off these women,” he said.

Mr Chell confirmed that six people were injured, three seriously, in the crash.

The driver, who remained at the scene, suffered non life-threatening injuries and is cooperating with police.

Three of the injured were said to be fighting for their lives after the incident.

The initial collision between the taxi and the cyclist took place as the taxi driver turned left into Broadway, Mr Chell said.

Video footage showed the cab driver slow down and continue to veer to the left, and then mount the pavement.

“At this point the cab appears to speed up, and strikes two female victims and presses them against the wall.”

Mr Chell said accident investigators were still working to determine the cause of the accident and were speaking to witnesses, the taxi driver and examining surveillance video.

“Right now, it appears to be an accident,” Mr Chell said.

NYC Fire Department and ambulance staff treated the injured at the scene before transporting them to hospital.

A video showing the aftermath of the crash indicated the taxi had struck several planters before it ran into the building.