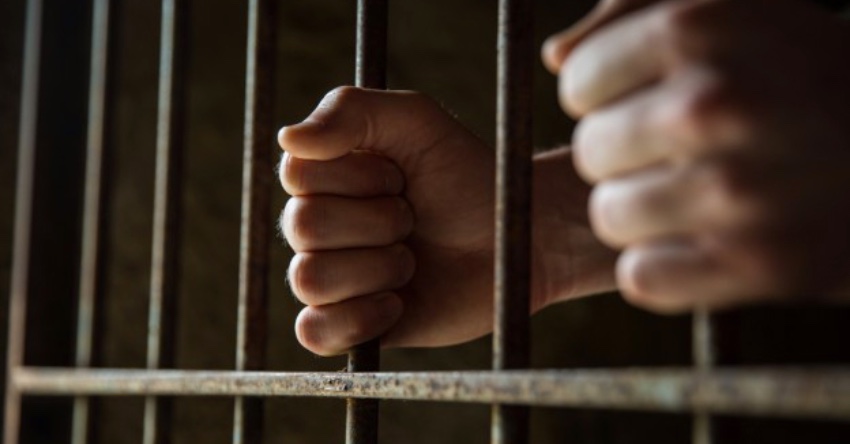 A robber who brandished a BB gun 'gangster style' at a taxi driver after demanding he hand over his car has been locked up for his 'terrifying' rampage.

'Intoxicated' Luke Birtchnell targeted two taxi drivers and tried to rob them of their cars during the 'scary' early-morning ordeal in the Black Country.

The Birmingham Mail reports that his victims were left petrified they would be horrifically shot by the 21-year-old if they refused to hand over the keys to their vehicles.

The convicted arsonist was heard muttering 'oh that's long' after discovering he had been jailed for 64 months for the frightening assault in Willenhall on March 17.

Wolverhampton Crown Court heard how the defendant ordered a taxi from 24 7 taxi company to take him from his friend's property to his home.

He refused to leave the taxi when it reached Bloxwich Road South, so driver Zulfqar Ali grabbed him by the wrist to chuck him out.

The pair started fighting before Birtchnell jumped into the driver's seat and attacked his victim.

Prosecutor Howard Searle said: "Mr Ali took his keys from the vehicle to protect it. The defendant then threw his phone and Mr Ali's phone at him.

"He made threats to shoot him and stab him. He made demands for the keys to the taxi. Mr Ali refused.

"He then punched Mr Ali to the nose, twisted his arm, chased him around the car before grabbing his glasses and damaging them."

A passer-by stepped in after spotting the ordeal and stood between the two men, giving Mr Ali time to drive off in his Toyota.

Mr Searle added: "Mr Ali describes feeling scared. He said he was attacked before and can't control the fear or handle it. He said he was too frightened to go back to work."

The court heard how the defendant did not have a gun when he threatened Mr Ali but then grabbed the imitation firearm from his home before calling for another taxi about an hour later.

He asked the same taxi firm to take him to a Poundland near a Wetherspoons in the area.

But he stopped the taxi in cul-de-sac Regent Street and pointed a BB gun at taxi driver Bikramjit Sekha from a back seat.

Mr Searle said: "Mr Sekha said he thought it looked real and it made him scared. Birtchnell placed it to his neck and shouted at him to give him the keys otherwise he would shoot Mr Sekha."

Mr Sekha quickly jumped out of his taxi and told Birtchnell to take the vehicle, the court was told on Monday (May 16).

The victim then spotted Mark Simpson scrapping his frosty car window outside a property in the street and asked if he could seek refuge in his home.

The pair went inside before Mr Simpson realised his car was still running and went back out.

But Birtchnell then headed towards him, 'waving' the gun in a 'gangster style' before demanding to have keys to his grey Peugeot 208.

Neighbour Adam Cheek was outside tending to his car at about 5.30am when he noticed the commotion. The defendant then threatened him, claiming he would hurt him if he did not hand over keys to his white Vauxhall Corsa.

Birtchnell declared "I will shoot you" and grabbed hold of the man, who eventually managed to break free and walk away. He then ran off and was tracked by police who arrested him at home.

The court heard how the defendant has 21 convictions for 14 offences including battery, arson, possession of a knife and threatening behaviour.

Oliver Woolhouse, defending, said Birtchnell never made off with a vehicle during his 'bizarre' offending.

The convict - who had a troubled upbringing - has no recollection of the events because he was 'intoxicated', Mr Woolhouse said.

He added: "This was a single course of conduct conducted over a relatively short period of time.

"He is remorseful and has shown some, if limited, empathy."

He said: "These were serious offences for which you clearly targeted taxi drivers, demanding to steal their cars and their money.

"This was done in the early hours of the morning and it's quite clear from their victim impact statements that this was terrifying for each of them.

"Taxi drivers provide a public service, working into the early hours and are clearly vulnerable. At the time of these offences, you were under the influence of alcohol but it's quite clear you knew precisely what you were doing."

Birtchnell - who appeared at the court via video link from HMP Birmingham - admitted three counts of attempted robbery, two counts of theft, possession of an imitation firearm and robbery.